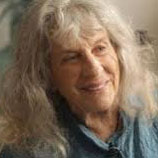 Mary Frank is a British-born American artist best known for her abstract paintings and sculptures which depict the emotional impact of memory and loss. Frank has developed a unique process of creating art in which she works with the medium until the form of the piece reveals itself to her. Born February 4, 1933 in London, United Kingdom, her mother was the painter Eleanore Lockspeiser. During World War II, Frank was sent to live with her mother’s parents in Brooklyn, where she remained for several years. As an art student, she studied under German painter Max Beckmann at the Brooklyn Museum of Art School, as well as under Hans Hofmann at his private studio school in Greenwich Village. Although the artist was trained as a painter, she was inspired to pursue sculpture after purchasing her first kiln in 1969. Since then, Frank has been recognized for her dramatic and emotive sculptures of animals and human subjects. Today, her works are in the collections of the Art Institute of Chicago, The Museum of Modern Art in New York, the National Gallery of Art in Washington, D.C., the Museum of Fine Arts in Boston, the Dallas Museum of Art, and the Museum of Art at Yale University in New Haven, CT, among others. Frank lives and works between Lake Hill, NY and New York, NY.