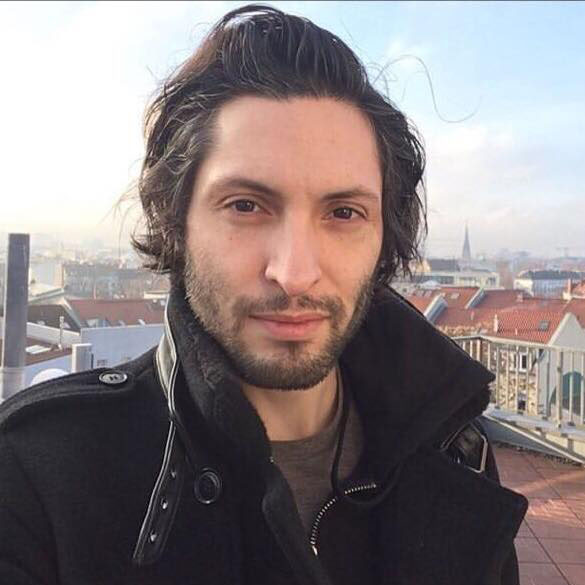 Ernesto Ortiz Leyva was born in Fort Bliss army base in El Paso, Texas to Mexican immigrants from Ciudad Juárez, Mexico. He received his BFA in Painting and Drawing from the California College of the Arts in 2005. In 2003 he attended the École supérieure d'art et de design Marseille- Méditerranée, in Marseille, France. He was awarded the RA Brown Memorial Scholarship in 2003 and the Robert Ralls Memorial Scholarship in 2004. In 2007, he moved from San Francisco to Berlin, where he studied the German language and stayed until 2010. While in Berlin, he participated in several group exhibitions at various galleries including Friedrichshoehe Brauerei, and Künstlerhaus Bethanien. He worked with curator Jesi Khadivi to exhibit work at the Kreuzberg gallery, Golden Parachutes. After returning to San Francisco, he was accepted into the graduate Painting and Drawing program and awarded the New Artist Society Merit Scholarship by The School of the Art Institute of Chicago in 2012. In 2013, he was one of five artists chosen to participate in an exhibition entitled Evidence: Artistic Responses to the Drug Cartel Wars at Intersection for the Arts in San Francisco. He received an MFA degree in Painting and Drawing from SAIC in May 2014. In 2017, Ernesto was chosen as the first ever Artist in Residence at the International Print Center of New York, IPCNY, thanks to a generous grant from the National Endowment of the Arts. His work has recently been exhibited at the Editions/ Artist Book Fair and Art on Paper in Manhattan. His drawings, paintings, and etchings explore themes of sexual vulnerability, social conflict and political aggression, expressed in a unique variety of satiric, surreal and grotesque modes, drawn from a wide range of pictorial influences. He recently taught printmaking at City University of New York in Staten Island and he currently lives and works in Brooklyn.